The Indian Creek watershed is approximately 125 square miles and contains over 130 known discharges from abandoned coal mines. These discharges have resulted in contamination of surface water, wells, and springs for decades. Because Indian Creek flows into the Youghiogheny River, abandoned mine drainage in our smaller area has impacted and diminished water quality throughout the Greater Youghiogheny River Watershed.

Over the past 20 years, Mountain Watershed has raised almost $9 million dollars to create mine drainage treatment systems that remove harmful pollutants and have helped to restore the water and hence, quality of life, in our region. Given the success of our existing restoration activities and the tendency for mining in this watershed to produce discharges, any current and proposed coal mining activity is a huge risk for our area.

See How Much We've Fundraised So Far

LCT Energy LP’s Rustic Ridge Deep Mine is currently active and has permits to mine a 2,886-acre area in Donegal Township, Westmoreland County, and Saltlick Township, Fayette County. The operation is a room and pillar deep mine in the region known as the Indian Creek Coalfield, which lies within the Indian Creek Watershed- a subwatershed to the Youghiogheny River. The type of coal that is found in the area is metallurgical coal, which is commonly used in steel production or mixed with lower quality coal for power generation.
Image Credit: DEP

Despite significant public outcry for impacts to environmental and community health, LCT Energy has submitted a permit application to expand their operation by 1,400 acres, with future plans to expand by an additional 3,000 acres towards Bullskin, Mount Pleasant and Cook Townships. The footprint of the proposed mine expands into the Loyalhanna Watershed and would threaten the headwaters of that watershed, specifically Fourmile Run.

Details about the mine expansion | PA Dept of Environmental Protection’s website. 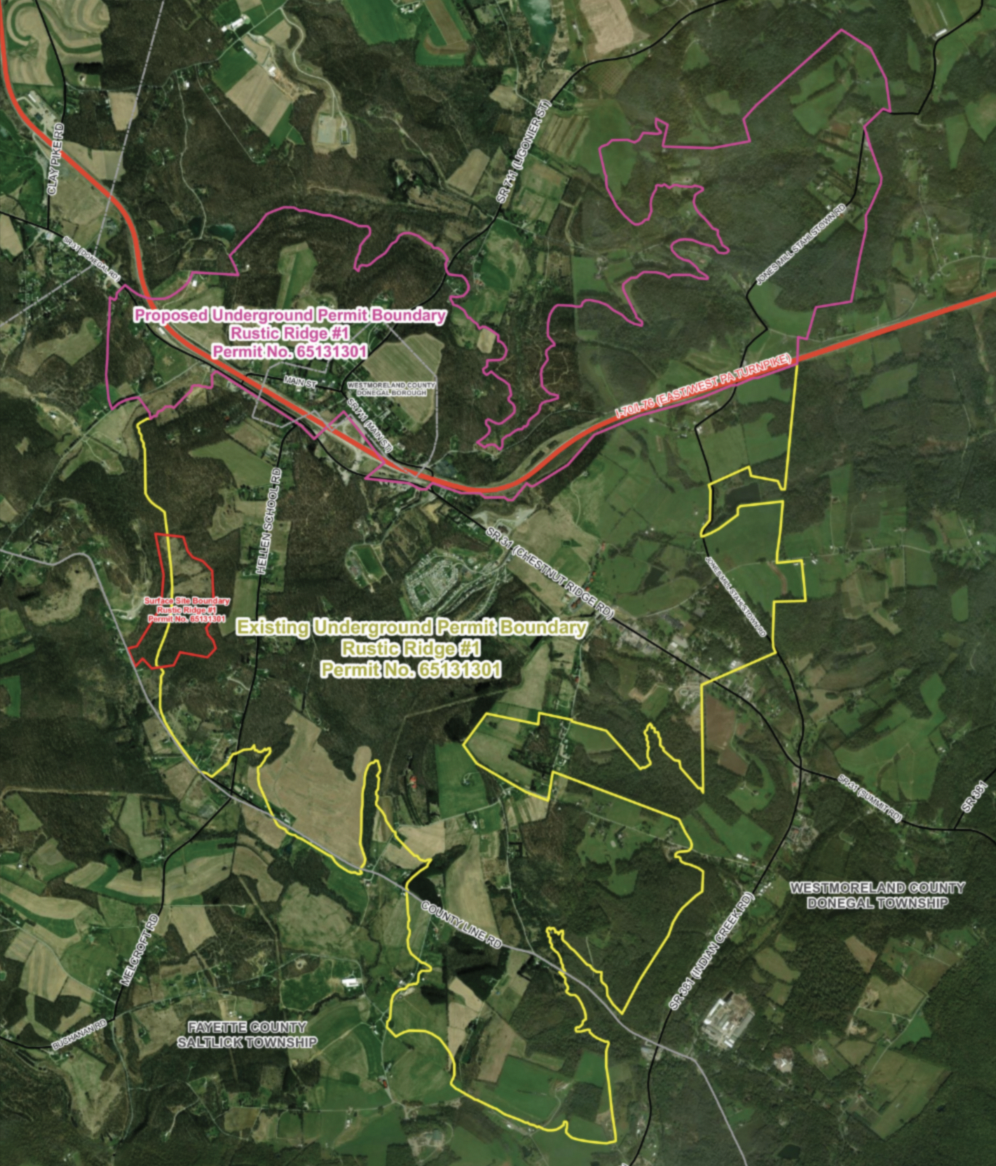 Mountain Watershed employs many strategies in the hopes of mitigating and preventing these impacts. One of those strategies is to educate the public on their legal rights, as well as preparing for the possibility of a direct legal challenge to LCT Energy’s proposed expansion. We plan to work with a private law firm that is one of the only in the state that regularly – and successfully – litigates against the mining and fracking industries. While we are confident in their ability to bring forward the best possible case for us, legal challenges are inevitably costly.

We have set a goal of raising $500,000 to support our legal challenge of the Rustic Ridge Deep Mine expansion in order to protect the health of our watershed and all who depend on it. 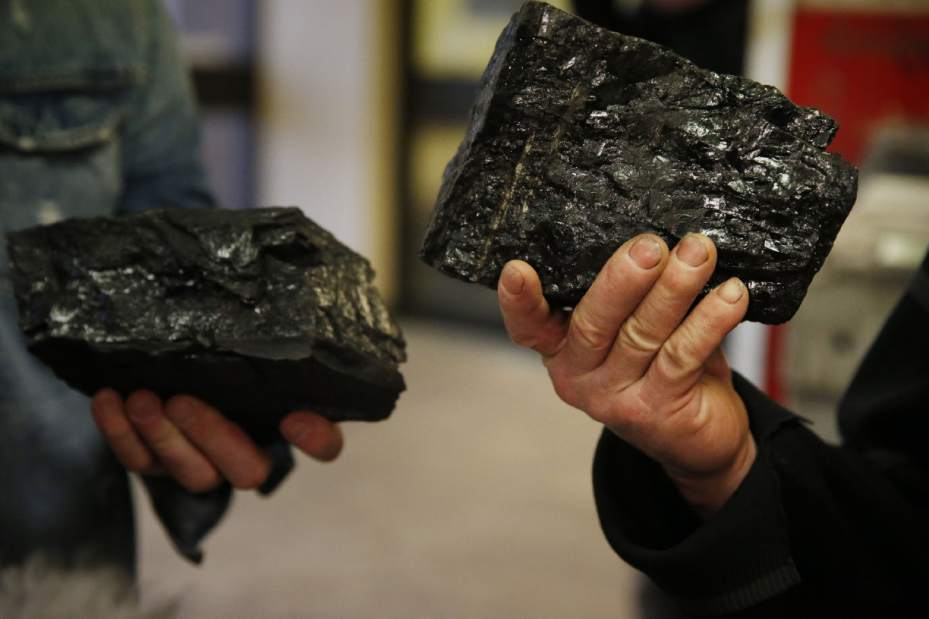 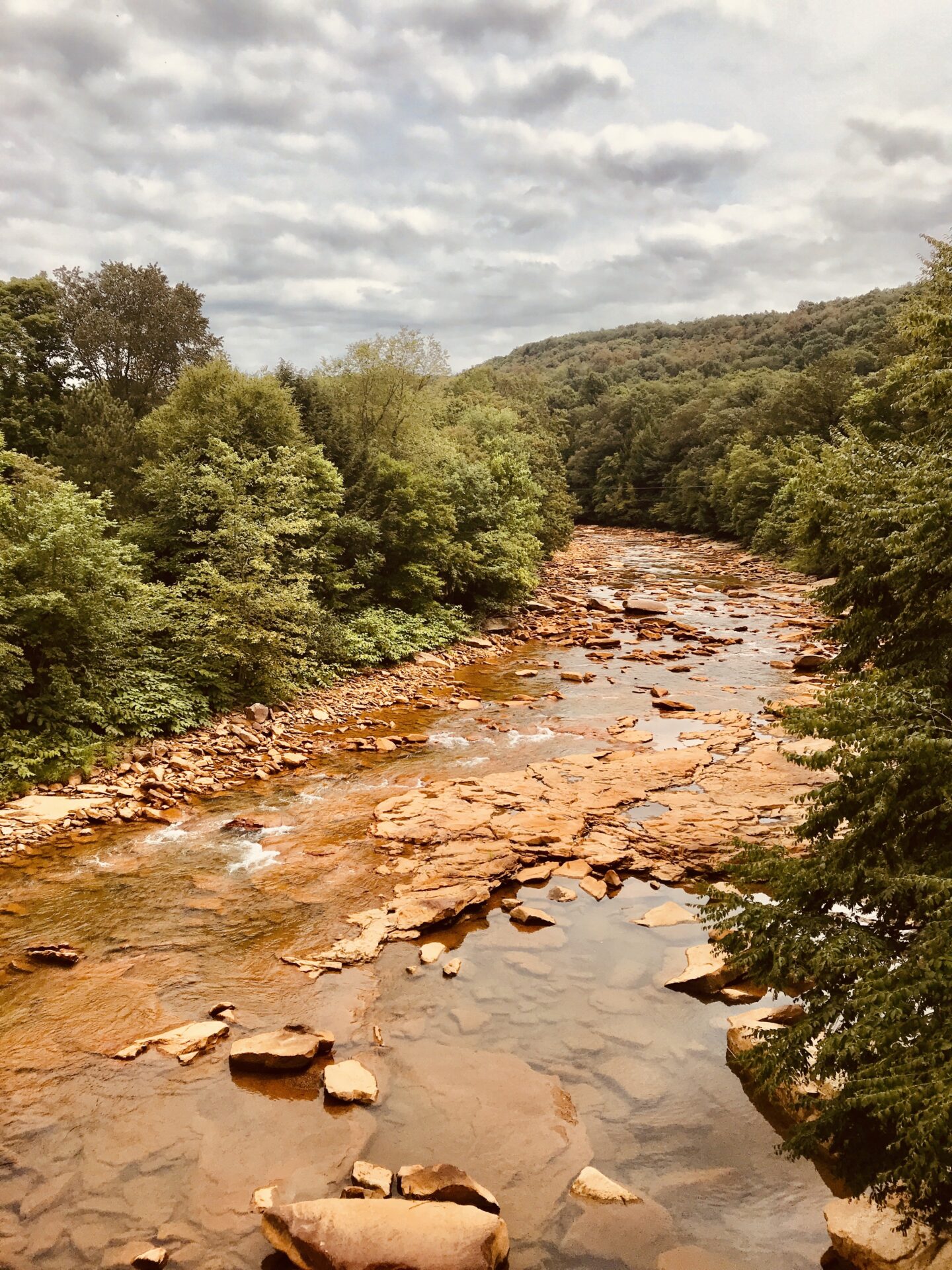 IMPACTS ON THE WATERSHED

We predict that the proposed expansion could significantly dewater the headwaters of the Loyalhanna Watershed by removing water from Loyalhanna and redirecting it to the Indian Creek Watershed. Considering the size of the proposed expansion, MWA believes this would result in the headwaters of the Loyalhanna – specifically Four Mile Run – eventually going dry while Champion Creek of the Indian Creek Watershed would become chronically flooded.

Given the anticipated life of the mine, it is possible that the Four Mile Run headwaters will be reduced to a trickle and Donegal Lake will have dried up long before mining is complete.

As if that is not enough reason for concern, we believe that it is likely that mining in this area will result in acid mine discharges along the banks and within the streams of the Four Mile Run headwaters, impacting the larger Loyalhanna Watershed.

View the Projected Mine Maps

Through grassroots organizing, MWA has regularly met with concerned community members and municipalities addressing the growing issues around Rustic Ridge. Considering these concerns and the broader possibility of impacts throughout the Laurel Highlands, we are progressing with a legal appeal to prevent irreparable damage to the area’s groundwater supply, clean air, and quality of life in the greater Youghiogheny, and Loyalhanna Watersheds. Join us in the fight to Defend the Yough.

Expanding Coal Mines Threaten the Heart of the Laurel Highlands

LCT Energy, LP is a metallurgical coal producer headquartered in Johnstown, PA. Many Fayette and Westmoreland County residents are already familiar with the company, as it operates the Rustic Ridge…

Subsidence is Damaging Properties in Footprint of Rustic Ridge Deep Mine

“I have been fighting this mine since before it was put in the ground and now I am falling into it,” noted one resident who lives in the footprint of…

MWA continues to offer support to the concerned community  Over the past several months, residents have contacted MWA and relayed concerns about issues such as: odors, water loss from residential…